I mentioned last week that the second aspect of the fertility regimen corn farmers are face with that I wanted to discuss before plant 2017 really commenced was starter fertility. There is no quicker way to get a room full of corn producers active in conversation than to bring up the topic of starter fertility in corn. It is a widely-accepted and used production practice in the northern corn belt as a tool to manage planting corn early, or in cool and wet soil conditions as so often happens here in the North.

As I was writing this post a tweet appeared on my time line from respected long-time Extension Corn Specialist from Purdue University in Indiana, Bob Nielsen, about starter fertility in corn: 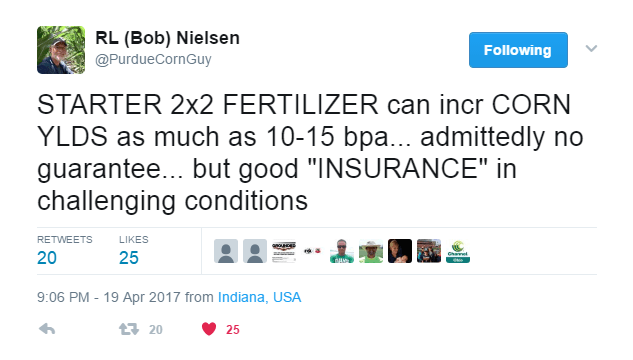 He followed that post up with a few more eastern corn belt specific recommendations: 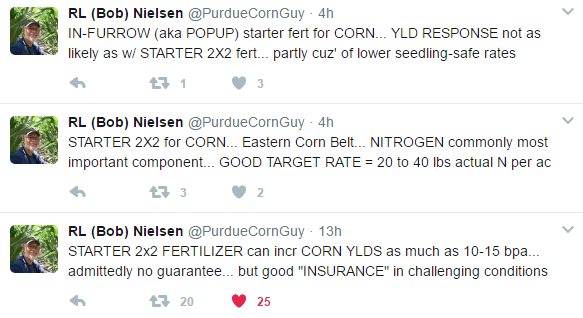 None of us need a reminder that production in the Northern Corn Belt is different than production in the Eastern Corn Belt, however Dr. Nielsen’s recommendations are a nice place to start. Moving closer to North Dakota, Dr. Daniel Kaiser from the University of Minnesota published some recent work on in-furrow starter fertilizer in corn in the Agronomy Journal (doi:10.2134/agronj2016.02.0124) and has discussed it in multiple popular press and extension articles. His research came to some nice and concise conclusions in Minnesota corn production in a corn/soybean rotation. His northernmost research site would be about parallel latitudinally with our Richland county growers, however most of his research sites were in Southern MN. His conclusions were:

Dr. Kaisers results were quite interesting and based on rigorous small-plot experiments. Research I personally have been involved with in North Dakota has been largely inconclusive on pop-ups due to having only a few environments tested, and general difficulty with small-plot research and this type of treatment, which has always left me with questions about starter fertilizers in corn. However, in speaking with Extension Soil Specialist Dr. Dave Franzen here at NDSU, he had some general recommendations that he gives. His general thoughts from personal communication I had with him are that 3 GPA pop-up is a high enough rate for an expensive fertilizer, and that everyone in North Dakota planting corn should use a starter fertilizer in the form of a popup or some form of side by side. His last note to me was that dribbling a pop-up on top of the soil surface for corn production does not make much sense here in North Dakota, even though it works in the Eastern Corn Belt.

To conclude, I have been told many times that most farmers have a story where one nozzle/tube was plugged on their starter setup, or they ran out of product, and have witnessed the stark difference in early season vigor without adding some form of starter. Therefore, use a starter fertilizer in corn production. I want to leave you with some discussion points about starter fertilizer in your operations:

Update: I am clearly discussing an issue on many folks’ mind, as after this article was sent off for posting, another tweet appeared in my lunch hour timeline to add to the discussion (recommendations from Nebraska):