California, the nation’s largest transportation fuel market, was the first to issue a stay-at-home order on March 19th.  By April 7th, 313 million people in 42 states and the District Columbia had been placed under similar directives asking them to avoid all but essential travel.  North Dakota declared a State of Emergency on March 13th, ordered school closures statewide beginning March 16th, and imposed a variety of restrictions on businesses, but never issued a formal stay-at-home order.  During the same period, more than 15 million Americans filed initial unemployment claims, while millions of others began working from home.

Together, stay-at-home orders and the hiatus of daily commutes led passenger vehicle travel to fall significantly.  March vehicle miles traveled (VMT) fell 80 percent from the year before. This is an especially depressing number considering that the impacts of Covid-19 only started coming to a head in the second half of the month.  April VMT proved to be even worse at only 60 percent of their 2019 level. 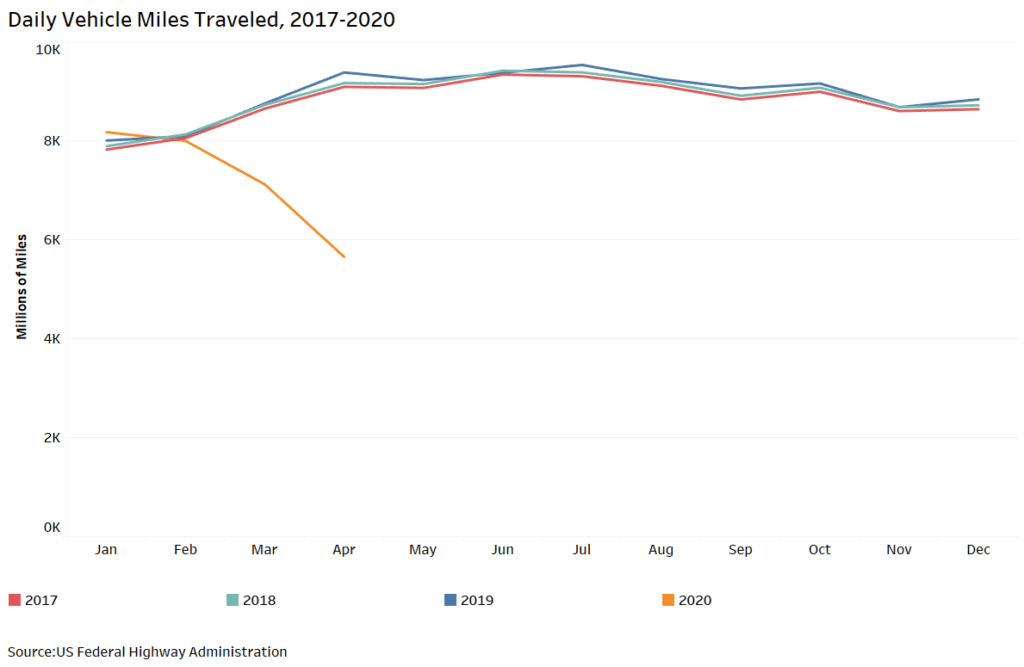 With clear expectations of a decline in transportation fuel demand, the corn-ethanol market slashed production.  By mid-April output had fallen to less than half of pre-Covid levels.  This was achieved through a combination of temporary shutdowns, production slowdowns, and permanent closures with 130 of the nation’s refineries taking some sort of action. 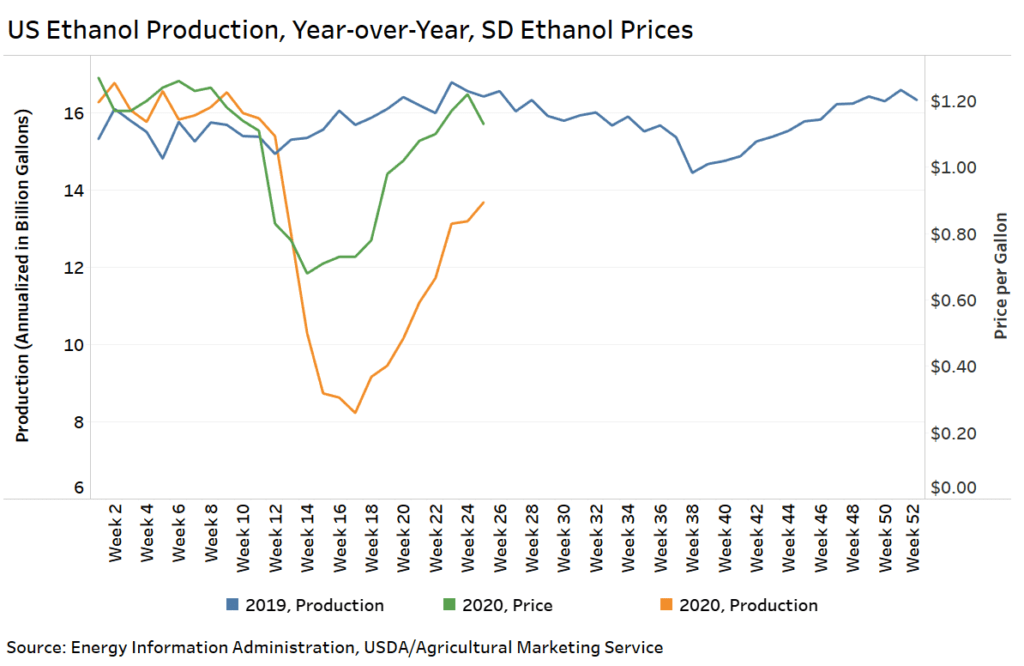 Reduced ethanol production on agricultural markets has been strongly felt.  Less refining resulted in lower corn prices and corn use.  The North Dakota corn price received by farmers, as reported by USDA, was $2.82 per bushel in April, the lowest springtime price for corn since 2005, the year the Renewable Fuel Standard became law.  Nationwide, through the end of June, the ethanol industry used 400 million fewer bushels of corn than during the same period in 2019, an amount equal to almost 3 percent of the entire 2019 corn harvest.

Co-product availability became a major concern especially for livestock feeders who had come to rely on distillers grains in their rations.  Regional distiller’s prices increased 50 percent in the last two weeks of March peaking at about $200 per ton.   Similarly, bottlers needing carbon dioxide and biodiesel refiners looking for corn oil also faced shortages.

The collapse in ethanol demand led refining margins far into the red where they remained for much of the first half of the year.  Ethanol had its lowest price, 68 cents a gallon, and margins in mid-March, early in the crisis. 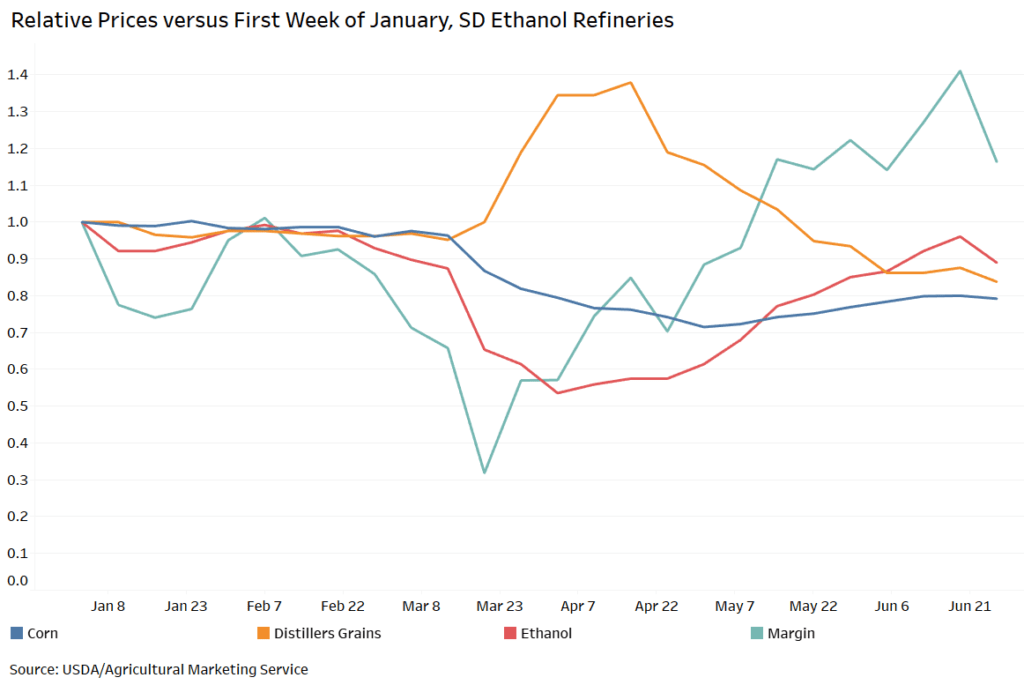 Exports have been a rare bright spot, as some foreign buyers took advantage of ample supplies and lower prices.  Columbia and Mexico, two emerging ethanol markets, made their largest ethanol purchases ever in April.  For the month, they were the nation’s third and fourth largest destinations for ethanol, beating Canada whose imports declined significantly due to Covid-19.  Fortunately, many of the country’s largest ethanol trading partners in east and south Asia appear to be coming through the crisis relatively unscathed, in part due to systems put in place after experiencing the SARS outbreak in 2009.

Additional good news has come in the form of stable carbon prices that provide an incentive for the use of low carbon fuels like ethanol.  The price of California carbon credits has been just under $200 per metric ton with record volumes traded in the last two months.

One of the largest eventual casualties in the region from the crisis will be Coal Creek Station, a coal-fired power plant near Underwood whose retirement was announced in May.  Coal Creek supplies steam to Blue Flint Ethanol, a 65-million gallon a year corn-ethanol refinery.

Since mid-April, domestic use and production have increased to almost 85 percent of their pre-Covid level and continue to trend in the right direction.  Refiner margins have dramatically improved since that time as excess stocks have been whittled down and corn prices have remained at near historic lows.

Excess refining capacity continues to hamper the ethanol industry.  Beyond increased domestic gasoline sales, the industry would also benefit from increased sales of higher blends such as E15, growing export sales, or a combination of the two.

Looking forward, the domestic transportation fuel market needs the broader economy to continue to recover, for unemployment to decline, and for consumers to increase their confidence and spending.  The primary risk remains Covid-19 in the form of continued occurrences or outbreaks and the resulting economic disruption.