As pollination is finishing throughout the North Dakota corn growing region, we can now make the first estimate of the grain yield potential of a field since the number of ears and number of kernels per ear can be fairly accurately estimated. The only yield component that requires some guess work is kernel size. Of course this whole exercise depends on reasonable growing conditions for the remainder of the season. The process for estimating yield that we describe here is widely used and is proposed due to its simplicity.

The general equation is: ears per acre x kernels per ear divided by a divisor = bushels per acre 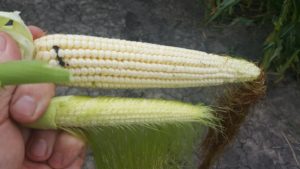 The silks become detached from kernels soon after fertilization. There has been no fertilization in the ear at the bottom as the silks have just recently emerged. Only the kernels closest to the tip have not been fertilized in the top ear. The silks arising from the upper most ovules are the last to emerge and therefore the last to be fertilized.
This form of yield estimation is just an estimate. Check it with your yield monitor and grain cart scales at the end of a field to see how far you were off. It is naturally very hard to capture whole field variability with an estimation using only a small part of a given field.