North Dakota is divided into seven districts. These districts elect a member to serve producers on the North Dakota Corn Utilization Council. Tysen Rosenau of Carrington, ND represents those producers in District 4. District 4 is comprised of Eddie, Foster, Griggs, Stutsman and Barnes Counties.

Rosenau is a graduate of Carrington High School. Tysen received the honor of a National FFA award when he was recognized as a Star Farmer Finalist in 2016. He holds an associate of applied science (A.A.S.) degree in farm and ranch management from Bismarck State College.

Tysen and his wife, Markie, have been married since 2016. Markie works as a nurse at CHI St. Alexius Health Clinic in Carrington. Together, Tysen and Markie have two children – their son Brayden is two, and daughter, Ember, is 4 months.

Tysen began farming alongside his father in 2011. The farm was established by his grandfather, and is comprised of 6,000 acres of corn, soybeans and wheat near Carrington. “It is amazing to be able to work alongside my father everyday as I strive to improve the operation he and my grandfather built,” says Tysen. “With each year bringing new challenges, it is vital to have someone to bounce new ideas off of in this ever changing ag world. As I look to the future, it is exciting to be able to bring my children up with the same lifestyle and opportunities I had as a child.” 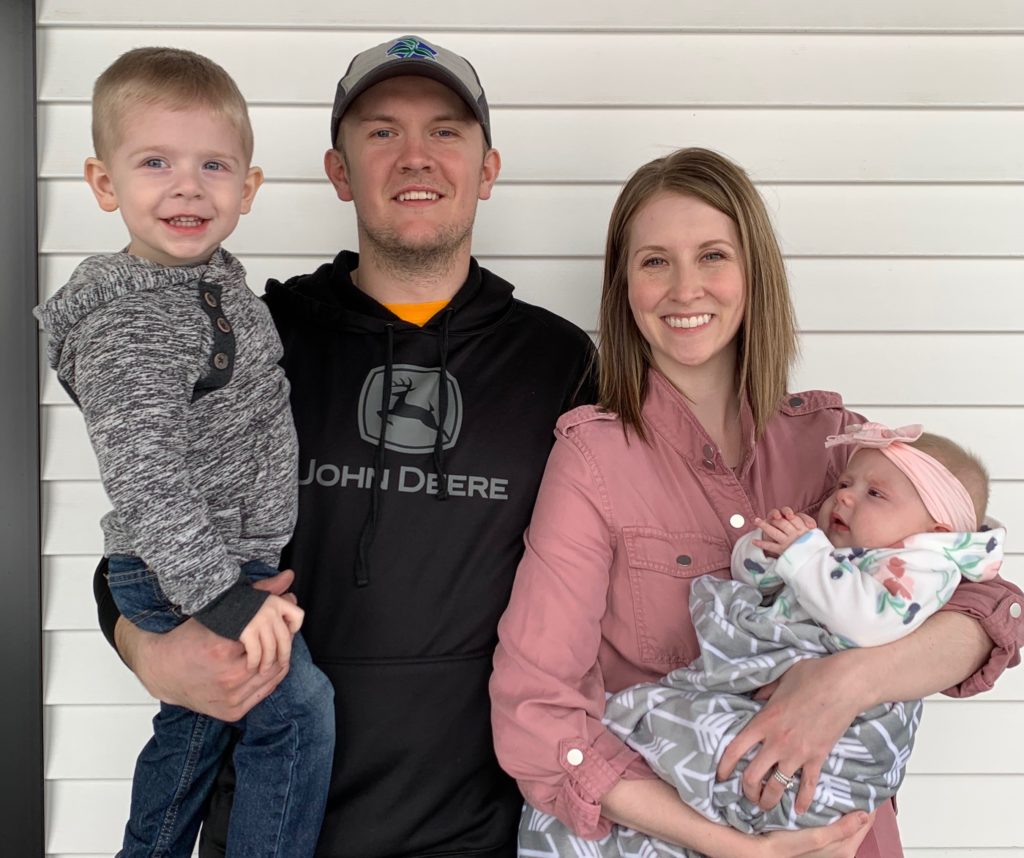 Tysen Rosenau with his wife, Markie, and their children, Lucas (2) and Ember (4mo).

Rosenau is excited about the opportunity to help fellow farmers understand the value of the corn check-off in North Dakota. “Understanding how the check-off program works in our state, and being a part of the allocation of check-off funds to support research, education and promotion of corn and its uses allows me to be a better advocate for farmers statewide. I hope to help others understand the power of our aggregated money.”

Tysen also takes a special interest in ethanol programming in North Dakota. “I am excited about the North Dakota Corn Utilization Council and North Dakota Ethanol Council’s joint effort to increase ethanol infrastructure in our state through the Unleaded88 Expansion Program as well.” Ethanol is an important part of rural economic development, contributing $623 million annually to the state’s economy and creating thousands of jobs across many sectors.

Tysen was recently elected by his peers to serve as the Secretary/Treasurer of the North Dakota Corn Utilization Council. In addition to serving corn farmers in North Dakota as a member of NDCUC, Tysen sits on the board of directors for the Arrowwood Prairie Cooperative. In his spare time, Tysen enjoys time at the lake, ice fishing, getting together with friends and family, and traveling with his family.