Ferebee is a graduate of Halliday High School. He holds an associate of arts (A.A.) degree in farm and ranch management from Dickinson State College. 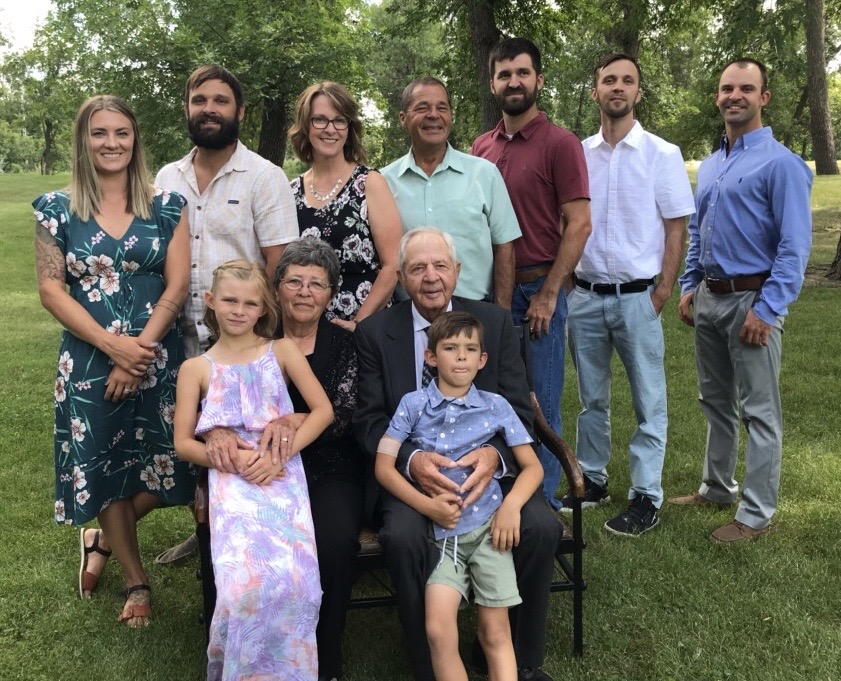 Robert and his wife, Amy, have been married for 35 years. Amy works at the Union Bank in Halliday, ND. Together, Robert and Amy have 4 adult sons – Quinten, Kyle, Clay and Brock. Their oldest, Quinten, and his wife Marrah have two children, Ember and Sylas.

Robert has been farming with his father since 1982 when they ran predominantly an animal operation. Robert farms today with his father, Cliff, and two of his sons, Kyle and Clay. The Ferebee farm and ranch raises a variety of crops including corn, winter and spring wheat, canola, soybeans, pulse crops like peas and lentils, and a few specialty crops. They keep busy with a cow and calf operation as well.

“Kyle is a big part of the farming operation, while Clay is the Rancher and takes care of the cattle with Grandpa Cliff’s help,” shares Robert. “We are a multi-generational operation. My parents, Cliff and Marion, are retired but still live on the home farm with us. They play a very important part in the operation and give us our inspiration with their positive attitudes and work habits. They keeping us focused and energized.”

Robert has also been the recipient of a variety of awards including the Manitoba-North Dakota Zero Tillage Farmers Association Farmer of the Year Award, the Northern Pulse Growers Association Producer Award, and the Dunn County Soil Conservation District Award.

Ferebee is excited about the opportunity to help fellow farmers understand the value of the corn check-off in North Dakota. “Understanding how the check-off program works in our state, and being a part of the allocation of check-off funds to support research, market development, education and promotion of corn in all forms allows me to be a better advocate for farmers statewide,” says Robert. “Additionally, the North Dakota Corn Utilization Council plays a role in finding value-added uses for corn – whether in livestock feeding, ethanol and exports – through research at Universities in our home state and international export organizations. It is rewarding to be a part of that industry cooperation.”

Because he runs a cow/calf operation, Robert also takes a special interest in livestock programming in North Dakota and serves as a North Dakota Corn Utilization Council representative for the U.S. Meat Export Federation and the North Dakota Livestock Alliance. “Livestock is an important destination for North Dakota corn. Exporting corn through U.S. beef and pork added an average of $0.46 to bushel value in 2019, and without these markets North Dakota farms would have lost $189 million in corn revenue last year. Our work with state, national, and global organizations focused on expanding market share for U.S. raised livestock is critical to the corn industry here at home,” shares Robert.

In his spare time, Robert enjoys team roping as well as traveling and golfing with his wife Amy. They both enjoy the time they get to spend with family.