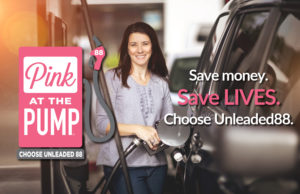 Sixteen North Dakota retail stations offering Unleaded88 participated in this promotion by donating three cents of every gallon of Unleaded88 sold from Oct. 1 through Oct. 31 to North Dakota Women’s Way.

“Petro Serve USA stations across the state welcomed the opportunity to be part of this campaign for North Dakota,” says Kent Satrang, Petro Serve USA CEO. “We are honored to contributing to Women’s Way knowing the great work it is doing on early detection of breast cancer.”

Unleaded88 is a fuel blend containing 15 percent ethanol, just five percent more ethanol than E10, the most commonly used fuel in the U.S. Unleaded88 is often sold at a 5- to 10-cent per-gallon discount to E10 and is approved by the Environmental Protection Agency for use in all 2001 and newer vehicles.